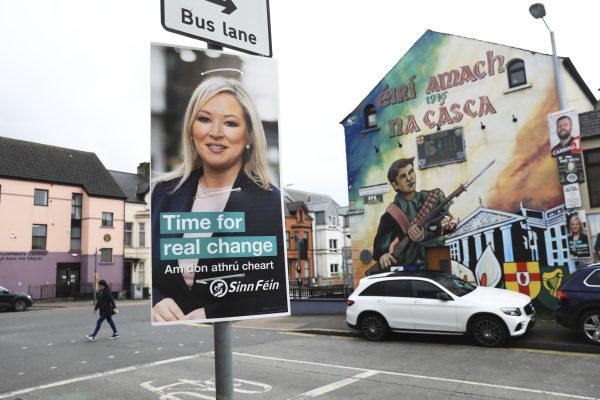 Sinn Féin appeared on course to pull off predictions of a historic victory in Northern Ireland’s elections in what would mark the first time the nationalist party, committed to Irish reunification, has outperformed unionists in the region.

Michelle O’Neill, Sinn Féin’s leader in Northern Ireland, looked relaxed on Friday as she easily held her seat in mid-Ulster, to cheers from supporters. “I feel very positive,” she declared. “We said this was an election about the future. It is going to be potentially a historic election.”

The centrist Alliance party was also confident it had delivered a strong showing in Northern Ireland’s elections held on Thursday, underscoring how many voters no longer accept traditional tribal unionist and nationalist divisions.

Full results are expected to trickle in throughout Friday and into the weekend.

If pre-election opinion polls are correct, a Sinn Féin win would relegate the Democratic Unionist party, the largest party committed to preserving the region’s place as part of the UK, to a humiliating second place behind a party long associated with the republican paramilitary IRA.

But whatever the outcome for the 90 seats in the Stormont assembly, when the final tally becomes clear, one thing appears certain: the region’s devolved executive is unlikely to return for months.

The DUP has said it will boycott the power-sharing body unless post-Brexit trading rules for the region, which put a customs border in the Irish Sea, are scrapped.

A DUP refusal to form a new executive next week would open up the prospect of months of political limbo in Northern Ireland and even another election at the end of this year or early in 2023. Ministers would stay on in a caretaker capacity but no new policy could be enacted.

“I voted for Sinn Féin,” said Rose McKenna, 67, a retired social worker who has backed the nationalist Social Democratic and Labour party and the Alliance in past elections.

“It’s more about who you don’t want in than who you do. We need to get [the executive] back and do something to fix this place. I’m fed up of the old arguments.”

Retired social worker Rose McKenna voted for Sinn Féin. ‘It’s more about who you don’t want in than who you do. We need to get [the executive] back and do something to fix this place’ © Paul Mcerlane/FT

The Alliance, meanwhile, was confident it would leapfrog the SDLP and Ulster Unionist party to move into third place from fifth in the last elections in 2017.

Doug Beattie, leader of the UUP party, which had been the fourth largest in the outgoing assembly; and Greens party leader Clare Bailey, were under pressure to retain their seats.

In many cases, final results will be determined by how voters assign their second and subsequent preferences under Northern Ireland’s proportional representation voting system.

DUP leader Sir Jeffrey Donaldson, who was elected to assembly, will have to resign his seat at Westminster to enter Stormont. He told the Financial Times he was “always confident”. His party could benefit if voters from the small, hardline Traditional Unionist Voice party transfer their preferences to it.

While O’Neill focused her campaign message on the cost of living crisis, Donaldson has vowed not to take his party back into the region’s executive as long as the Northern Ireland protocol remains in place.

But even some DUP voters criticised his stance. “They should go back. You should always talk everything out,” said John Madden, 63, a labourer, carrying bags stuffed with red, white and blue bunting and Union Jacks for a street party for Queen Elizabeth II’s platinum jubilee in June.

UK prime minister Boris Johnson, who suffered bruising defeats in local elections in Britain on Thursday, has been preparing legislation to allow the UK to unilaterally rip up parts of the protocol, potentially triggering a trade war with Brussels.

Still, many voters expect the DUP to boycott the power sharing body. “There’s going to be an empty building up there [at Stormont],” said Alisha Hill, a 37-year-old hairdresser and single mum who did not vote. “I think our politics are pretty laughable here.”

Many voters expect the DUP to boycott the power-sharing body. Hairdresser Alisha Hill says, ‘There’s going to be an empty building up there [at Stormont]’ © Paul Mcerlane/FT

Alliance leader Naomi Long said the expected rise in support for her party highlighted the need to move beyond traditional divisions.

Under the 1998 Good Friday Agreement, which halted the three-decades-long conflict between republicans seeking to claim Northern Ireland and loyalists battling to remain British, Northern Ireland’s main unionist and nationalist communities must share power.

Politicians elected to Stormont must next week officially designate themselves as “unionist”, “nationalist” or “other”. Even if the Alliance does well, the “other” camp is still expected to remain considerably smaller than the two traditional communities.

Related Topics:featured
Up Next

Iceland Announces Packing Ban Set Roll Out in Every UK Supermarket ‘What a Pain!’ 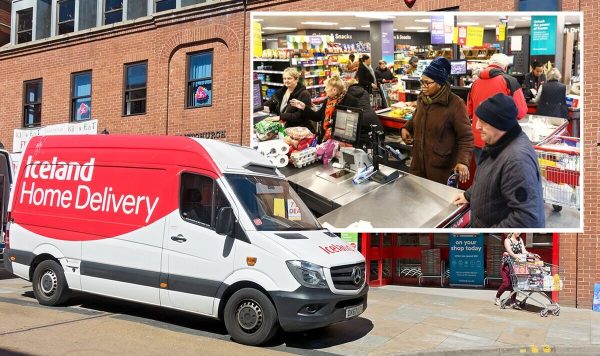 ICELAND has contacted its customers to announce a change to its home delivery shopping service.

EY: a Management Consultant’s PowerPoint Guide to Splitting Up 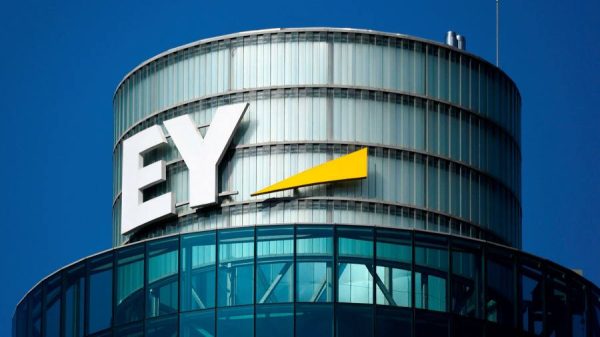 EY is hatching a pioneering split of its audit and advisory operations. It is a U-turn but a welcome one that — if it materialises — may set a template for its fellow Big Four audit firms. Presumably EY will start, as must all management consultants worth their salt, with a PowerPoint presentation. Lex previews the slide deck.

Slide 1: Venn diagram. EY’s global workforce of 312,000 does not coalesce into two buckets of audit and consultancy. In the middle sit a whole slew of bodies whose function serves both arms: in tax, pensions, IT, cyber security, industry expertise and other skill sets. Putting a line down the middle and sending half into the audit arm and the remainder into consultancy will not fly. Creating a third arm, which both sets can tap, seems messy.

Slide 2: Metaverse-mapped 3D flow chart (VR goggles provided). Take 140 countries, with — conservatively — twice that number of interested regulators and as many different legal structures. Add 13,000 partners, all of whom will have their own vested interests in terms of ring fencing liabilities and tapping income flows. They hold far more muscle than would be the case in your average public company: directors are replaceable, partners are the business.

Slide 3: Scatter plot chart. Severing ties with audit eliminates conflicts and thus widens the field of tech players EY can team up with to service clients. But that leaves it competing with the big integrated tech-savvy companies such as France’s Capgemini and Intel, Cognizant and Accenture (which has a two-decade head-start in going it alone) in the US.

Slide 4: Winners and losers. Slipped in at the end, because there will be many. In some ways Big Four firms resemble McDonald’s, or any other franchise. The local rainmakers draw in the business and a portion of fees go out for the name over the shopfront and technology. Asymmetric fiefdoms inevitably mean some partners have more to lose than others.

Tombstone: RIP the partnership model. It will take some fiendishly clever footwork to avoid tearing up the structure that has underpinned the industry through history. Client work is a doddle compared with this one. 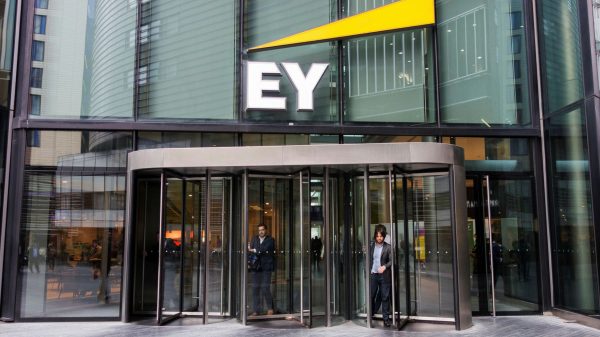 EY is exploring a public listing or partial sale of its global advisory business as part of the most radical transformation of a Big Four accountancy firm in two decades, according to people with direct knowledge of the matter.

A stake sale or listing would raise the prospect of a massive windfall for EY’s existing partners who own and run the firm, reminiscent of the IPOs of Goldman Sachs in 1999 and Accenture in 2001.

The 312,000-strong firm, which along with Deloitte, KPMG and PwC dominates the accounting industry, is considering a historic break-up of its business as a solution to the conflicts of interest that have dogged the profession and attracted regulatory scrutiny.

EY’s audit business, which generated revenues of $14bn last year, is likely to remain as a partnership following any break-up. Some advisers would shift to the audit side to support its work in areas such as tax, said people with knowledge of the details.

The newly independent advisory business would have the option of incorporating as a company, allowing it to take on external funding through a sale or IPO. Fresh investment could help it to boost growth and compete with larger consulting businesses such as Accenture, which reported revenues of $51bn last year and is valued at about $200bn on the New York Stock Exchange.

A break-up would also free EY’s advisory business to win work from companies audited by EY, opening up a swath of potential new clients that are currently off-limits under independence rules.

EY was being advised on its planning by JPMorgan and Goldman Sachs, people with knowledge of the matter said. The banks declined to comment.

The firm’s senior partners have yet to make a firm proposal to partners on whether to proceed with a restructuring and exactly what form it should take.

The sale of part of the business to external shareholders would be a radical departure. A senior partner at another firm said that selling parts of the business and handing the windfall to partners would significantly alter the existing structure where “you come in naked and you leave naked” with the business’s capital preserved for the next generation.

The Big Four are structured as networks of legally separate national member firms that pay a fee each year for shared branding, systems and technology. The set-up has prevented them from taking on external investment and made it difficult to push through radical overhauls, which require a broad consensus across the business.

However, EY is seen by many accountants as being best placed among the Big Four to push through significant international changes because its global bosses have greater influence than at competitors, where rank-and-file partners have more power.

Partners at EY will nonetheless have the opportunity to vote on any changes. Asked whether EY might line up investors before a ballot, a person with knowledge of the matter said: “We’re looking through those options. We’ll be looking to see what’s in the right interests of all the partners.”

EY and other professional services firms have “the doorbell ringing all the time” from private equity firms seeking to invest in parts of their business, said this person. An IPO would be more difficult to pull off than a private stake sale, the person added.

A split by EY would force its rivals to decide whether to follow suit. On Friday, PwC and KPMG both said they believed in the benefits of having their audit and consulting businesses under one roof.

PwC said it had “no plans to change course”. KPMG said a multidisciplinary model “brings a range of benefits”. Deloitte did not comment.

A break-up would probably attract dissent from some partners. Auditing has historically had lower profit margins and could struggle to recruit and retain staff, especially expert partners who make most of their money from consulting but provide crucial expertise in areas such as tax, said Big Four partners.

EY declined to comment on the possibility of a stake sale or an IPO. After news of its break-up planning on Thursday, global chief executive Carmine Di Sibio told staff in an email on Friday that “no . . . decisions have been made”.